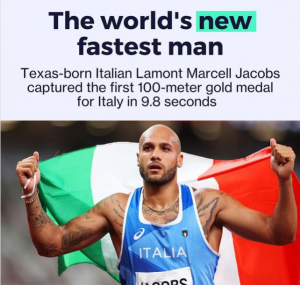 The 100 meters at the Olympics is the event that turns sprinters into kings: Jesse Owens, Carl Lewis, Usain Bolt.

The race that has long defined Olympic royalty went to a Texas-born Italian who hadn’t cracked 10 seconds until this year. He’s a 26-year-old whose best days before this came in the long jump. He’s a man even the runner in the next lane didn’t really know.

At the Tokyo Olympics, Lamont Marcell Jacobs is The World’s Fastest Man.
“I think I need four or five years to realize and understand what’s happening,” Jacobs said.

The Italian crossed the line in 9.8 seconds Sunday night to capture the first 100-meter medal ever for the country better known for its soccer prowess. Pietro Mennea won the 200 at the 1980 Olympics in Moscow and Livio Berruti won that race at the 1960 Games in Rome.

Even in a contest with no clear favorites — American Ronnie Baker was a candidate and China’s Su Bingtian ran a shocking 9.83 in the semis — Jacobs came from nowhere.
He topped America’s Fred Kerley, a 400-meter runner who moved down in distance because he saw a medal chance, and Canada’s Andre DeGrasse, who adds another 100-meter bronze to the one he won Rio.

“I really don’t know anything about him,” Kerley said of the new gold medalist. “He did a fantastic job.”

Jacobs’ path was made that much clearer because of who wasn’t in the race. The reigning world champion, Christian Coleman, is serving a ban for missed doping tests. The world leader in 2021 and the favorite to win the gold, Trayvon Bromell, didn’t make it out of the semifinals.

Bolt, who has commandeered the Olympic and every other sprint stage since 2008, is retired.

He was a sure thing in all nine Olympic sprints he ran from the Beijing Games — a stretch of dominance that redefined track and field, but also left a gaping hole in the sport when he called it a career.

“He changed athletics forever,” Jacobs said. “I’m the one who won the Olympics after him. That’s unbelievable. But drawing comparisons, I don’t think it’s the time now.”