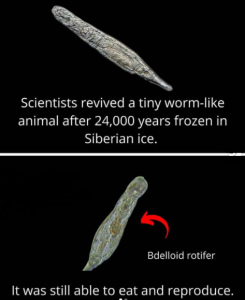 Russian scientists have been able to revive a tiny animal called a Bdelloid rotifer that was found in Siberian ice dating back 24,000 years.
.
These animals are not the oldest ever found to be able to survive freezing. In 2018, two parasitic worms known as nematodes were revived from ice that was at least 30,000 years old.
.
After thawing, the tiny worm-like organism was capable of eating when fed, as can be seen in the video.