DNA has been the predominant information storage medium for biology and holds great promise as a next-generation high-density data medium in the digital era. Currently, the vast majority of DNA-based data storage approaches rely on in vitro DNA synthesis. As such, there are limited methods to encode digital data into the chromosomes of living cells in a single step. Here, we describe a new electrogenetic framework for direct storage of digital data in living cells. Using an engineered redox-responsive CRISPR adaptation system, we encoded binary data in 3-bit units into CRISPR arrays of bacterial cells by electrical stimulation. We demonstrate multiplex data encoding into barcoded cell populations to yield meaningful information storage and capacity up to 72 bits, which can be maintained over many generations in natural open environments. This work establishes a direct digital-to-biological data storage framework and advances our capacity for information exchange between silicon- and carbon-based entities. 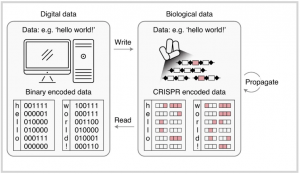 Extended data
Extended Data Fig. 1 Development of a redox-sensing DNA-based cellular recorder for direct digital-to-biological data storage.
This system is composed of two distinct modules: (i) a ‘sensing module’ that converts a desired biological signal into a change in copy number of a trigger plasmid (pTrig), and (ii) a ‘writing module’ that overexpresses Cas1-Cas2 from a recording plasmid (pRec) to unidirectionally expand genomic CRISPR arrays with novel ~33 bp spacers acquired from genomic or plasmid DNA sources in the cell. In the presence of the desired signal, cells experience a shift in their intracellular DNA pool, driven by an increase in pTrig copy number, which results in an acquisition bias for pTrig-derived spacers amongst expanding CRISPR arrays. a, The lacI gene in the previous pRec22 was replaced with soxR gene from E. coli, and the lac promoter in the previous pTrig22 was replaced with soxS promoter from E. coli. P1 replication system is inactive in the absence of oxidative stress, and a mini-F origin keeps the pTrig plasmid copy number low. Upon induction with oxidative stress, SoxR detaches from soxS promoter and activates the P1 replication system to increase the copy number of the plasmid. b, pTrig copy number in the presence of various concentrations of phenazine methosulfate (PMS) in aerobic condition. pRec (with an additional copy of soxR gene) helps get higher fold-change of pTrig copy number by more efficient repression in absence of the inducer. c, pTrig copy numbers in the presence of pRec and various concentrations of PMS, and FCN(R) or FCN(O) in anaerobic condition. Fold change of the pTrig copy numbers at the given concentrations of FCN(R) or FCN(O) were plotted. d, Various aTc concentrations and (e) induction time for the expression of cas1 and cas2 genes were tested for CRISPR array expansion. f, Various FCN(R) and FCN(O) concentrations were tested for pTrig copy number induction and (g) pTrig-derived spacer incorporation. The proportions of pTrig-derived spacers among all newly incorporated spacers are displayed. All measurements are based on three biological replicates. Error bars represent s.d. of three biological replicates.

Extended Data Fig. 2 Construction of a multi-channel electrochemical redox controller.
a, In an anaerobic chamber, a Raspberry Pi controls 3 of 8-channel relay modules (total 24 relays), which turn on or off electrical signals into each chamber pair from a power supply, based on a python script running on a wirelessly connected PC. b, A pair of working and counter chambers is connected by an agar salt bridge. In a working chamber, cells are incubated in M9 minimal medium supplemented with antibiotics, aTc, FCN(R) and PMS. M9 minimal medium supplemented with FCN(O) and PMS is filled in another chamber (counter). c, A photograph of the multi-channel electrochemical redox controller in an anaerobic chamber. d, Changes in electrochemical redox states of FCN(R) in a working chamber (left) and FCN(O) in a counter chamber (right) measured by absorbance at 420 nm with (0.5 V) and without (0.0 V) electronic signals. All measurements are based on three replicates. Error bars represent s.d. of three replicates.

Extended Data Fig. 3 Encoding of 3-bit binary data profiles.
a, Schematic diagram of experimental steps for multi-round encoding. After each round of electrical stimulation, the cell population was recovered in the rich medium (LB) aerobically so that the induced/uninduced plasmid copy number in the previous encoding round can be diluted out and reset low. b, To determine the recovery condition, anaerobic and aerobic conditions were compared. c, Overlaid distributions of the plasmid copy numbers with/without signals at each round over the course of the multi-round encoding (Fig. 2b). d, CRISPR array expansion over the course of the experiment. e, The 3-bit binary data profiles are grouped by the number of electronic signals, and the proportions of pTrig-derived spacers among all newly incorporated spacers are displayed. f, To enrich the sequencing reads for expanded arrays with more new spacers (longer arrays), the magnetic bead-based size enrichment was performed. Frequency of arrays of different lengths (unexpanded and L1-L4) with and without size enrichment are plotted. g, Principal component analysis on the array-type frequency profiles for the 3-bit digital data profiles. All 9 independent biological replicates are shown for each 3-bit digital data profiles. The first three independent datasets used for training of the Random Forest classifier are highlighted. All measurements are based on two or more biological replicates. Error bars represent s.d. of three or more biological replicates.

Extended Data Fig. 9 Improving data reconstruction with error correction.
a, By using every sixth bit as a check point (checksum) for the first 5 bits, errors in data reconstruction can be detected and corrected for the selected 32 combinations of 6-bit digital data profiles based on the classifier’s confusion probability in Fig. 2f and Extended Data Fig. 9b. For example, for a digital input ‘011110’ could be classified as ‘011110’, ‘011010’, ‘001110’, or ‘001010’ with the probabilities of 69%, 14%, 14%, or 3%, respectively. Out of these 4 possible initial classifications, the last 3 are wrong and the 2 wrong classifications with a single bit error can be detected by the check point values and fixed. However, the classification result with 2 bits error cannot be detected by the check point value and therefore cannot be fixed. For all 32 combinations of 6-bit digital data profiles, possible classification results, their probabilities, and whether they can be fixed or not are summarized in Supplementary Table 2. b, Confusion probability for each of the 3-bit digital data profiles based on Fig. 2f. c, The check point values for each combination of eight 3-bit and four 2-bit digital data profiles. d, OPT2 encoding table with the estimated probabilities of correct classification for the 32 characters. e, Probability of correct decoding for the 32 characters (ordered by usage) for OPT and OPT2 6-bit encoding tables. f, ‘synbio@cu’ encoded in the genomes of barcoded E. coli populations using the OPT2 error correction strategy. Two errors from the initial classification were detected using the check points and successfully corrected as described in the figure. For classification of each barcoded cell population, an average of 492,289 total sequencing reads with 268,066 reads of expanded arrays (or 106,242 of L2/L3 arrays) that uniquely map spacers were used. Bead-based size enrichment was performed to enrich for expanded arrays and deplete unexpanded arrays. Frequencies of array-types are in log10 scale. All measurements are based on a single experimental study.

Extended Data Fig. 10 Data stability in replicating cells.
A mixed pool of 24 barcoded cell population encoded with a 72-bit text message ‘hello world!’ in Fig. 3 was subsequently diluted 1:100 every 24 hours into 3 mL fresh LB media with antibiotic for a total of 16 days (~106 generation, ~6.6 generations per day). a, Data stability in the propagating cell population over 100 generations. Accuracy indicates the proportion of bits that are correctly classified. >90% of the 72 bits could be correctly retrieved up to ~80 generations. Shaded region represents s.d. of three biological replicates. For classification of each barcoded cell population, an average of 82,860 of total sequencing reads with 40,502 reads of expanded arrays (or 17,139 of L2/L3 arrays) that uniquely map spacers were used. Bead-based size enrichment was performed to enrich for expanded arrays and deplete unexpanded arrays. b, Gradual changes in the relative abundance of 24 barcoded cell population over time suggests adaptive mutations with fitness effects arising in some of the subpopulation. Samples were collected at the time points indicated by arrows (day 0, 4, 6, 8, 12, and 16). All measurements are based on three biological replicates.