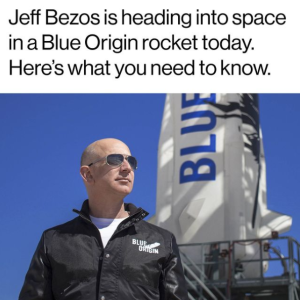 ● Jeff Bezos’s trip past the edge of space will look very different than that of his putative rival, Richard Branson.⁣

⁣
● Earlier this month, Branson journeyed in the belly of a space plane, which was carried to high altitude by another aircraft and dropped into the air. Then it rocketed to 53.5 miles (86 km) above the Earth and afterwards glided down and landed conventionally, on a runway.⁣
⁣

● On Tuesday morning, Bezos will go to space the old-fashioned way: on the tip of a rocket.⁣
⁣ 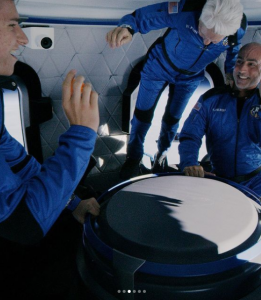 ● Propelled by a mixture of liquid hydrogen and liquid oxygen, the New Shepard spacecraft will lift vertically off the desert floor at Bezos’s ranch in West Texas, travel 62 miles overhead and then detach a crew capsule in which Bezos, his brother Mark, and two passengers will enjoy about three minutes of weightlessness.⁣

⁣
● The booster will return to earth first, accompanied by a sonic boom and at such speed that at first it will seem destined to crash—until the engine relights and, if all goes according to plan, it descends into a cloud of desert dust and lands upright. A few minutes later—again, if all goes well—the crew capsule will float down nearby underneath three parachutes. Then Bezos, the wealthiest person in the world, will no doubt emerge jubilantly from the capsule door.⁣
⁣ 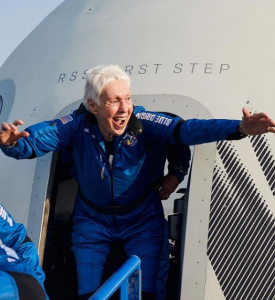 ● A successful New Shepard launch will represent a delayed triumph, of sorts, for Bezos and his private space company, Blue Origin. Bezos founded it in 2000 with his early winnings from Amazon and a vague notion of creating “an enduring human presence in space,” as early mission statements put it. Since its start in a nondescript warehouse south of downtown Seattle, Blue has expanded its mandate, developing orbital and moon programs but often losing out on lucrative government contracts to Space Exploration Technologies Corp., founded by Bezos’s other rival for space glory, Elon Musk. Blue Origin now employs about 3,500 people at its headquarters in Kent, Washington, and manufacturing hubs in Huntsville, Alabama, and Cape Canaveral, Florida. 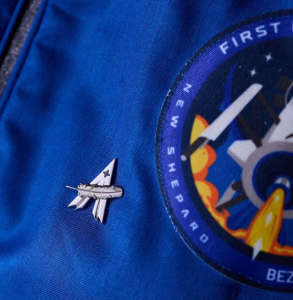